This page is updated near the beginning of every month with the most recent results from Steam's Hardware and Software Survey. Bookmark it and check back as new surveys are released.

The drop in Linux user share in late 2017 to early 2018 was due to a combination of factors. First was a counting error in the survey that Valve admitted to and later fixed. The error resulted in over-inflated user numbers from net cafes. Additionally, this time period was the peak player count for the hugely successful title PlayerUnknown's Battlegrounds. PUBG brought a lot of new players to the Steam platform from regions where net cafes are a popular way to play games. Both of these factors combined to substantially deflate the Linux user share on Steam. Because of overall growth of Steam however, a drop in Linux share does not necessarily mean an absolute drop in Linux players. 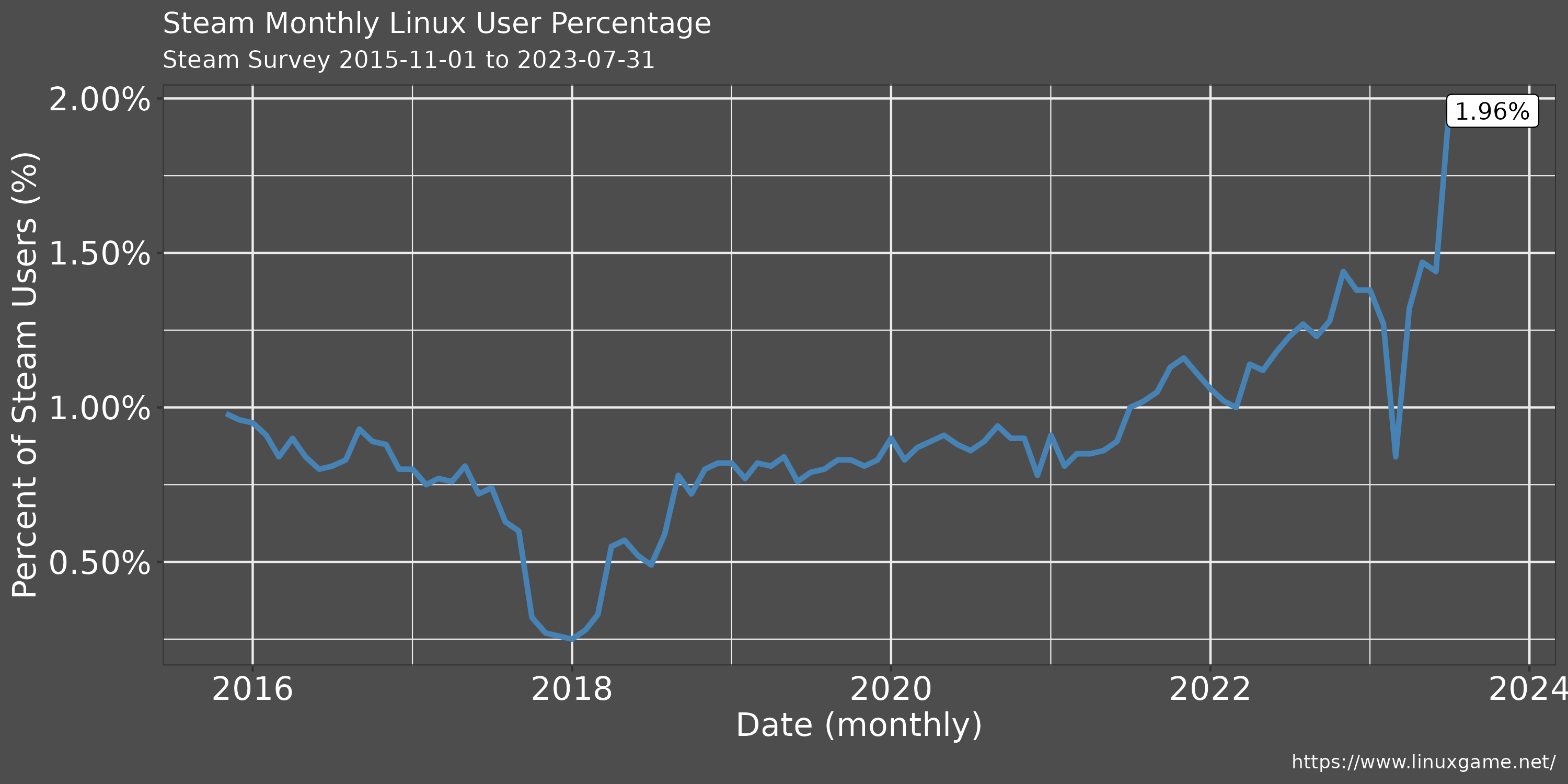 Restricting to reported OS language shows some interesting results with regards to the Linux share on Steam. The percentage of Linux users, of those with an English language OS, is around twice that of the general population. It's unclear whether this difference is due more English speakers preferring Linux, or more Linux users preferring English. But it's a surprising difference non-the-less. 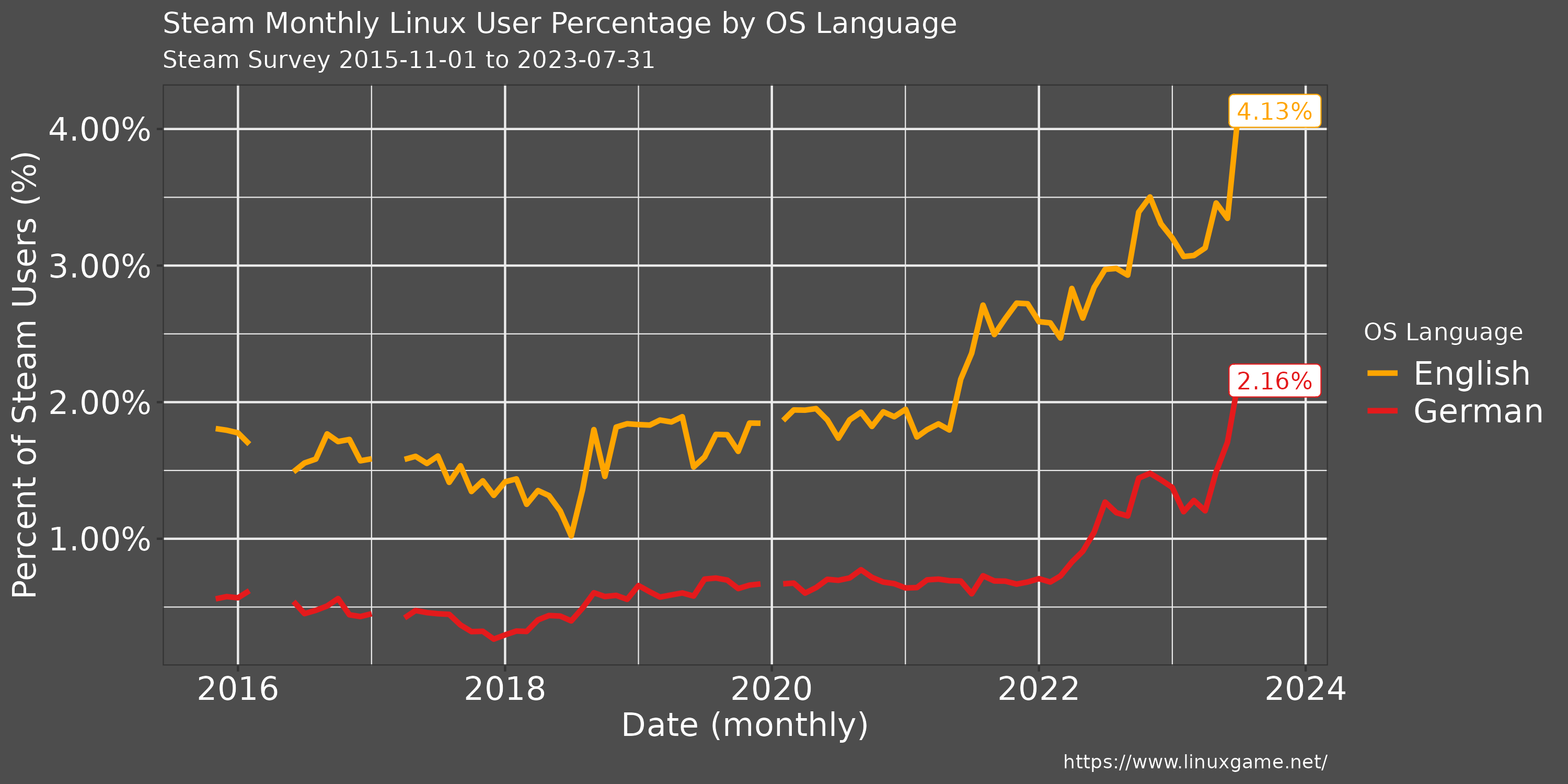 Since the release of AMDs Ryzen CPU line in early 2017, more and more Linux users have been foregoing Intel processors in favour of AMD. However, Intel still has a clear market lead. 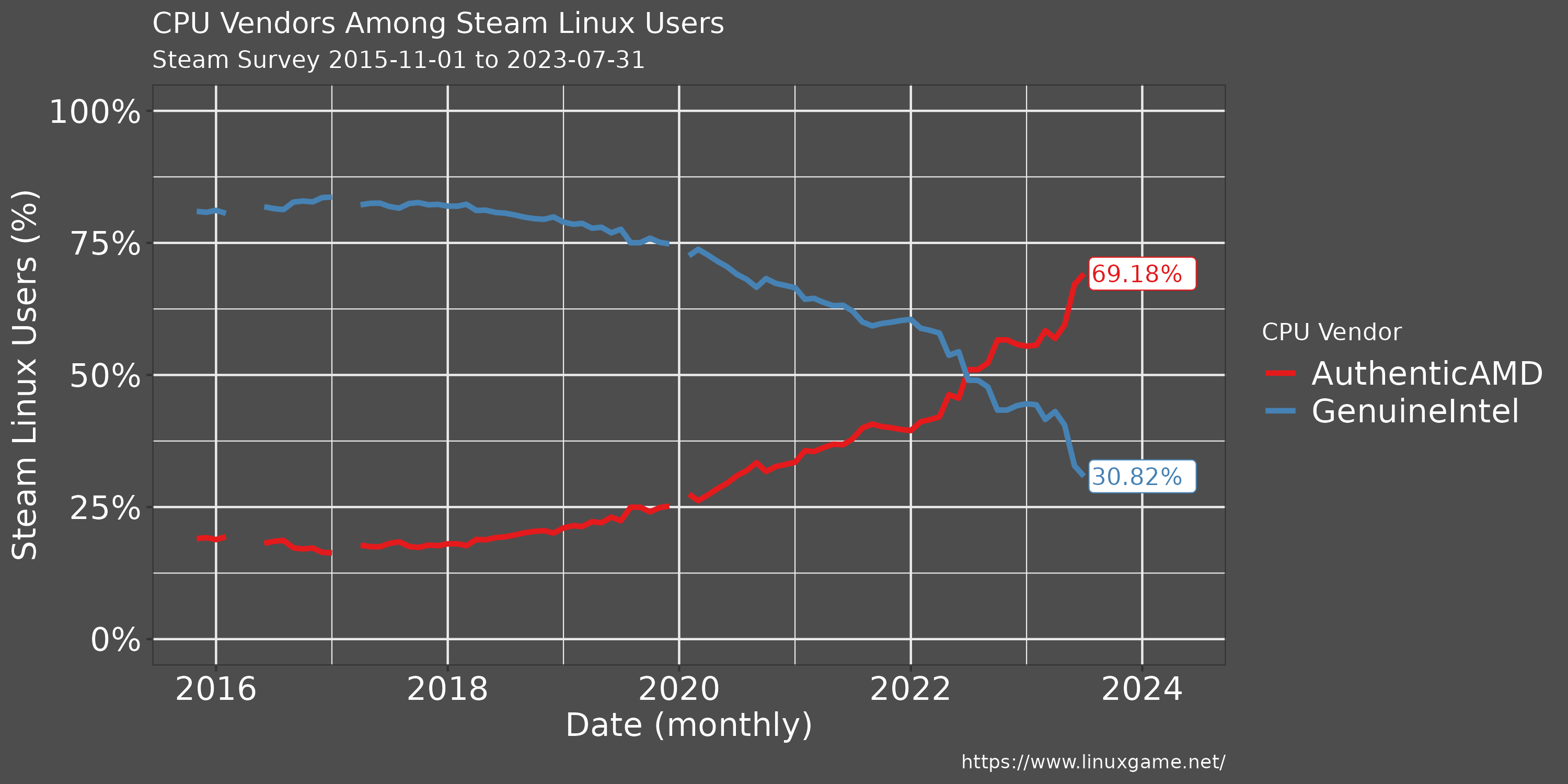 Note: GPU vendors have been missing for Linux users on Steam's survey since March, 2021

AMD is taking up ground in the GPU space among Linux users on Steam. The results of AMDs open source initiative began to bear fruit in 2017/18 as game performance approached some of Nvidia's offerings. Despite a closed-source video driver, Nvidia still remains the main choice among Linux users. 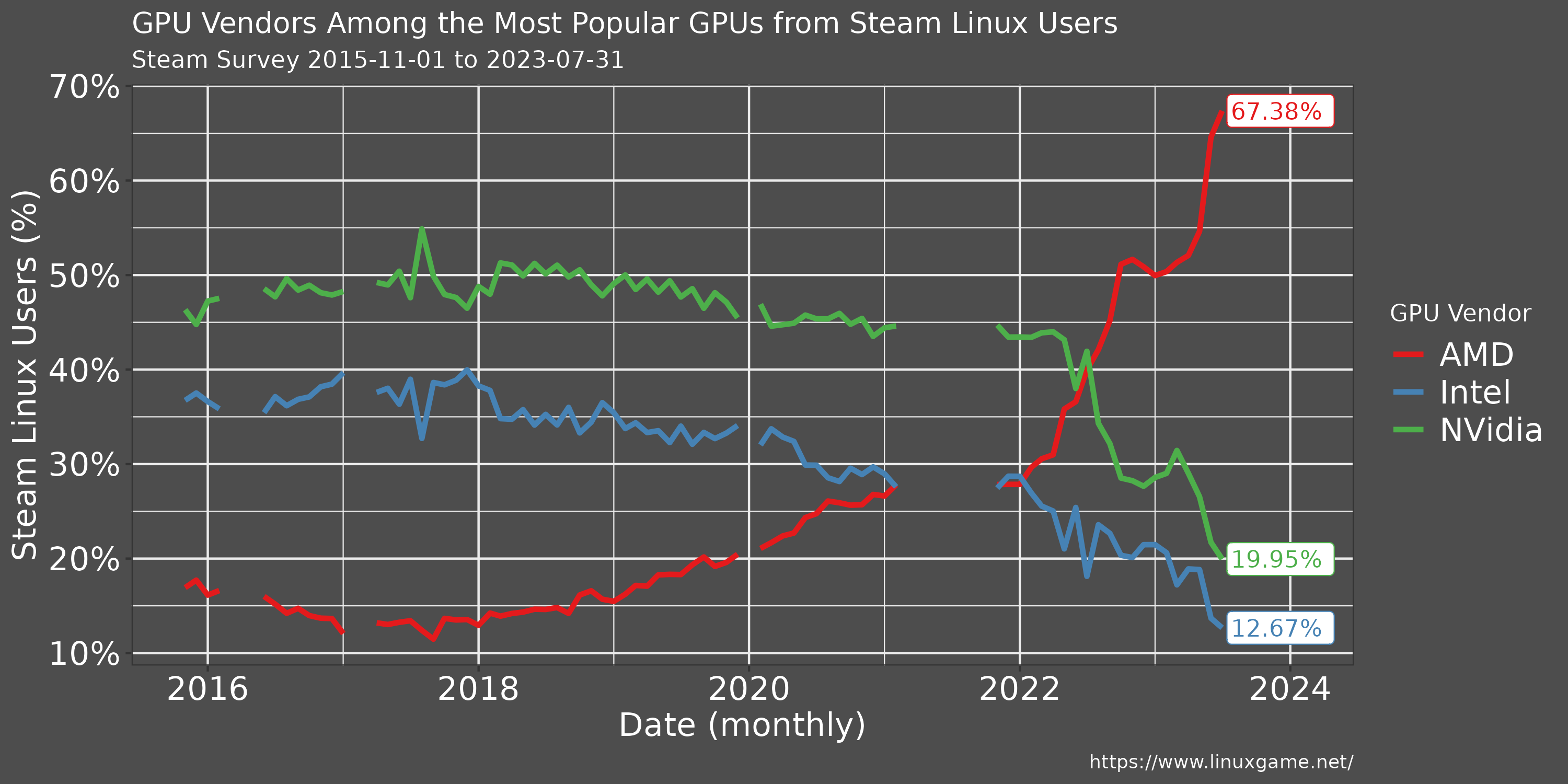 Steam (unfortunately) does not report many different Linux distributions, preferring to group most in the 'Other' category.

Ubuntu remains the most popular Linux distribution on Steam and many Linux games specifically target Ubuntu as a supported OS. This has the effect of generally being the smoothest experience for new users. Outside of Ubuntu, there is a great variety of Linux distributions, many of which will also have no issues running games on Steam. 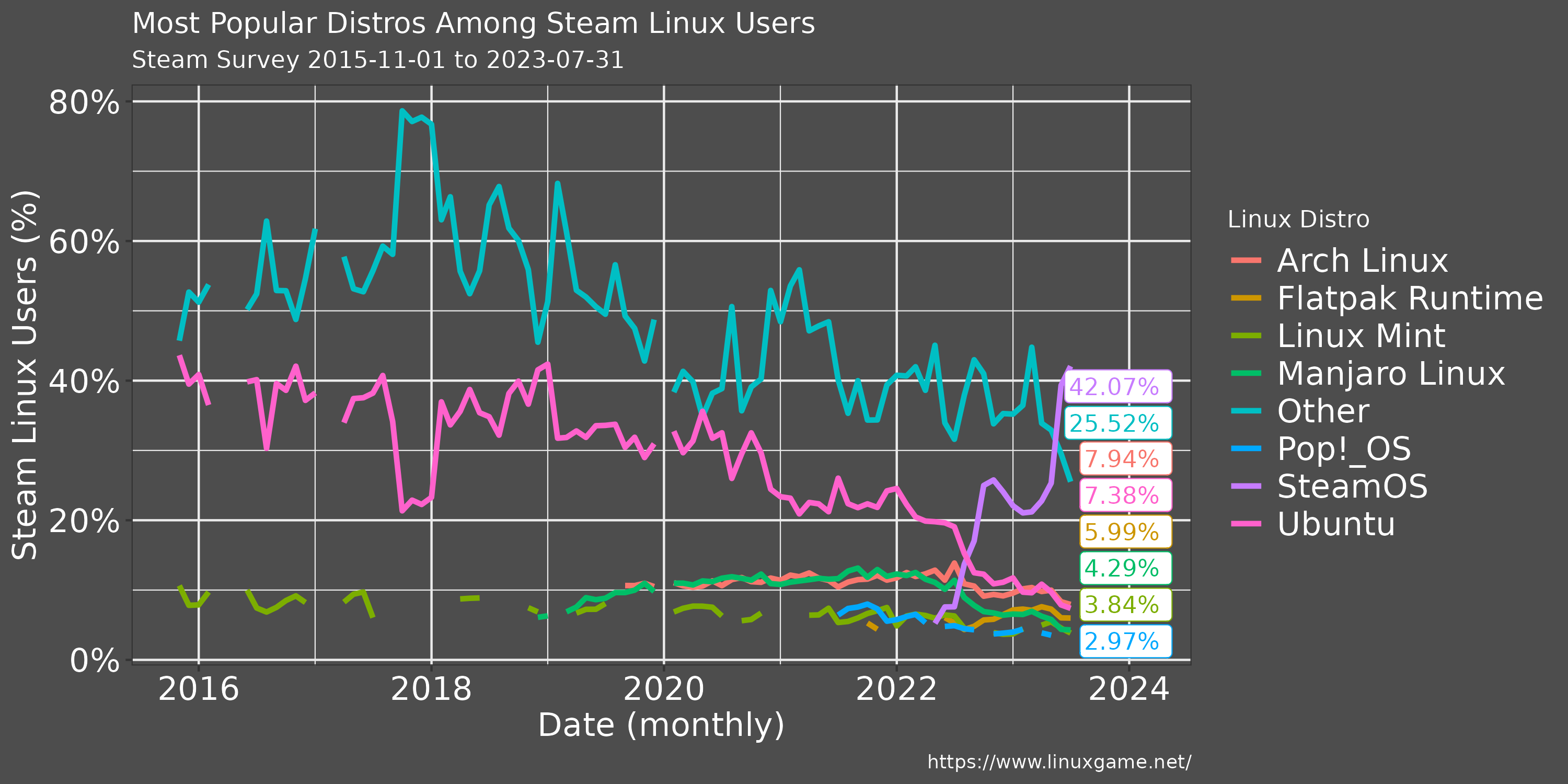 Source: all data sourced from Steam's Hardware and Software Survey