Bees are buzzing in the latest Minecraft snapshot 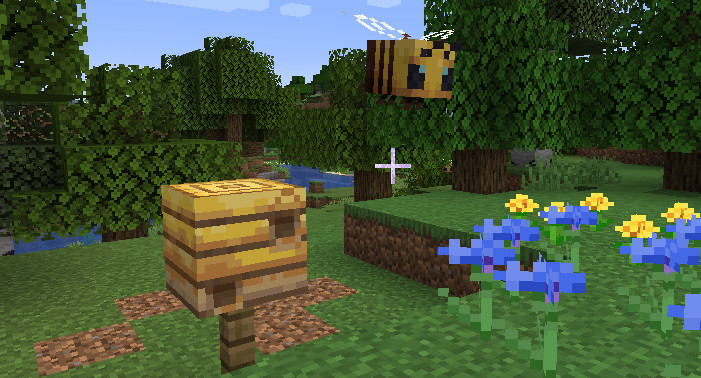 After some hiatus, snapshots are back in Minecraft: Java Edition. The latest update (19W34A) introduces bees to the game as a neutral creep. They can be found flying around in three different biomes: Flower Forests, Plains, and Sunflower Plains. Their hives are usually found nestled up to trees in these biomes.

Bees like to collect pollen from nearby flowers and bring their locations back to the hive to share with the others. If bees fly over crops on their way back from collecting pollen, they will pollinate the crops and speed up their growth. So it's best to have flowers and bee nests on opposite ends of your farm to get the full effect.

Once a hive or nest is full of honey it can either be harvested into a bottle, as pure honey, or sheered to give honeycomb. Honeycomb can be combined with wood to create more bees nests! Which means more bees!

Thankfully bees are neutral and won't attack unless provoked. If they do attack, they will leave their stingers behind and eventually die without dropping anything. So bee nice!

It's great to see Minecraft Java continue to get updates and bees are a super cute addition. Check out the complete release notes for the full details.